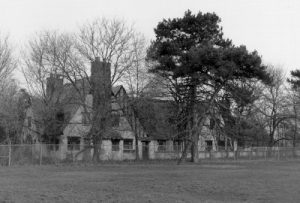 A combination of events which are not individually beneficial, but occurring together to produce a good or wonderful outcome.   Wiktionary

Many of the people I work with at the Packard Proving Grounds (PPG) have asked me how I got involved with the site and what role I played in saving it from demolition and development.  Here is the story, as much as I can remember.  Besides the memory issues, the story is also a challenge to relate because it is a haphazard mixture of serendipity and luck sprinkled with guesswork and dogged perseverance.

My association with the PPG started in 1991 when my husband and I bought a house in Shelby Township near the Ford Utica Trim Plant where he worked.  I was working in Southfield and my daily commute down Van Dyke took me past what my husband told me was a building that was once part of a Packard facility.  What I saw was an expansive lawn with a large, once-elegant Tudor Revival building at the far end, mostly obscured by trees.  I noted the sun glinting off small windows through the leaves, patches of the colored slate roof, and timber-framed walls.  To the south were the very noticeable and grand wrought iron gates on stone pillars.  The place looked abandoned and decrepit but I was intrigued by the sense of mystery it conveyed.  I was hooked.

Around this time, I began pursuing a degree in historic preservation at Eastern Michigan University.  Through course work, I learned about the popularity of the Tudor Revival style of architecture in Michigan in the early 20th century.  It was especially popular with automotive company executives and others who could afford elegant country manors.  I also learned that Albert Kahn was the architect many of the wealthy chose to design their homes.  I thought there was a good chance that the mystery house on Van Dyke could be a country manor designed for some Packard exec by Kahn.   So I started exploring.

Curious about weddings held on the PPG grounds?

Check out the farmers market that’s held on the front lawn of the PPG, May through October, on Saturdays 9 am – 2pm

Do we need to rent 2 sets of chairs for our wedding?